Writing Out the Letters

Syriac has twenty-two letters. Esṭrāngellā is the oldest style of writing, although all three scripts belong to all Syriac traditions. Syriac manuscripts demonstrate varied mix of styles that scripts today considered mutually exclusive were originally found across a broad continuum. Western (Sertā) often appear from the pen of a very Madnḥaya writer and visa-versa. Nevertheless, the advent of the printing press has seen the scripts become consistently segregated by church tradition. Sertā style is used by the Syriac Orthodox and Madnḥaya is used by the members of the Church of the East, or ‘Easterners.’ Serṭā itself means to scratch, to draw, or to write, but here it likely refers to a script developed first for the beeswax covered writing tablet, which likely gives the style its pointed and elegant style. Among Easterners, it is also called rhatā, or running script due to its quick form. Under the name of rhatā, it was considered an Eastern Script, although today few know of this tradition. A well-formed Syriac writer will know all three scripts with little difficulty.

The reed dip pen is the traditional writing instrument. Before the advent of paper, parchment was used, which was expensive. Writing of a less permanent nature would be done on a wooden board that had a raised frame with beeswax so that writing could be carved into it with a sharp stylus. Permanent writing, and eventually all writing as paper became an affordable and, later, disposable medium, was achieved with a cut reed and either India Ink or Iron-Gall ink. Eastern Script’s more broad and bold style requires several strokes and consumes more ink per letter than  Western Script, which is written with a more narrow cut to the reed. Western Script more often draws a letter left to right whereas Eastern from right to left, assuming the scribe is writing with the page at a 90-degree counter-clockwise rotation. Given the western habit of writing on a desk, with paper roughly perpendicular to the edge of the desk, this translates to Western more often forming letters from the top down, versus the bottom up tendency of the Eastern scribe. Middle Eastern scribes traditionally sit on a floor mat, using their thigh as a writing surface and thus forming lines of script almost perpendicular to their waist. Small desks or lap boards are also used while seated. Paper is often lined, using a board with strings tied to form a stencil. Lines are pressed, with a cloth over the right thumb by orienting the paper over the board, then pressing paper on the strings. TRT World has a beautiful video depicting Syriac calligraphy here. For any beginner interested in trying a broad tipped pen for Syriac writing, there are modified Pilot fountain pens available that permit proper letter formation as if using a reed pen and ink jar, but with much less technical skills required. Traditionally ink must be kept at the appropriate consistency in a jar with silk thread, and then applied with a reed properly cut, with its tip maintained.
Eastern Madnḥāyā Script 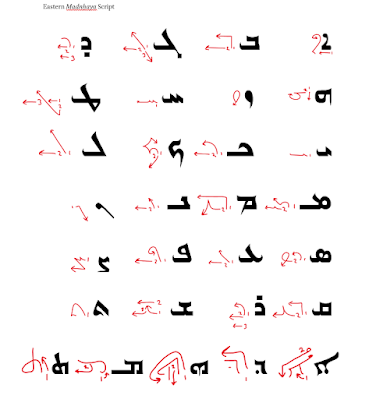 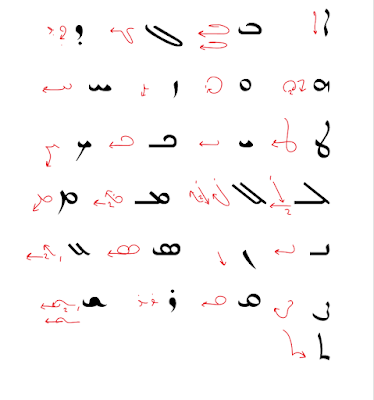 Traditionally, the alphabet is taught using a set of five mnemonics:

Purpose of this Blog

In this blog we shall call her The Church of the East. Here is my attempt at a succinct definition of what the Church of the East is in short paragraph. Christianity developed throughout the Roman Empire and by the forth century crystallized as the pentarchy of the patriarchs of Rome, Constantinople, Alexandria, Antioch and Jerusalem. At the same time, the Gospel was preached and received in Mesopotamia and went out across the Persian Sassanian Empire (although it may have begun during the late Parthian period). This Church of the East structured around the bishop, later Catholicos Patriarch, in the capital of the Persian Empire, Ctesiphon, and she missioned across Asia through Afghanistan, India and across to China and Mongolia. The Church of the East is Christianity as developed East of the traditional and ancient Eastern Orthodox world, sharing much theologically and philosophically with Greek speaking Christianity and yet remaining in practice and polity independent.